How To Remove Unsightly Bagworms From Your Trees And Shrubs 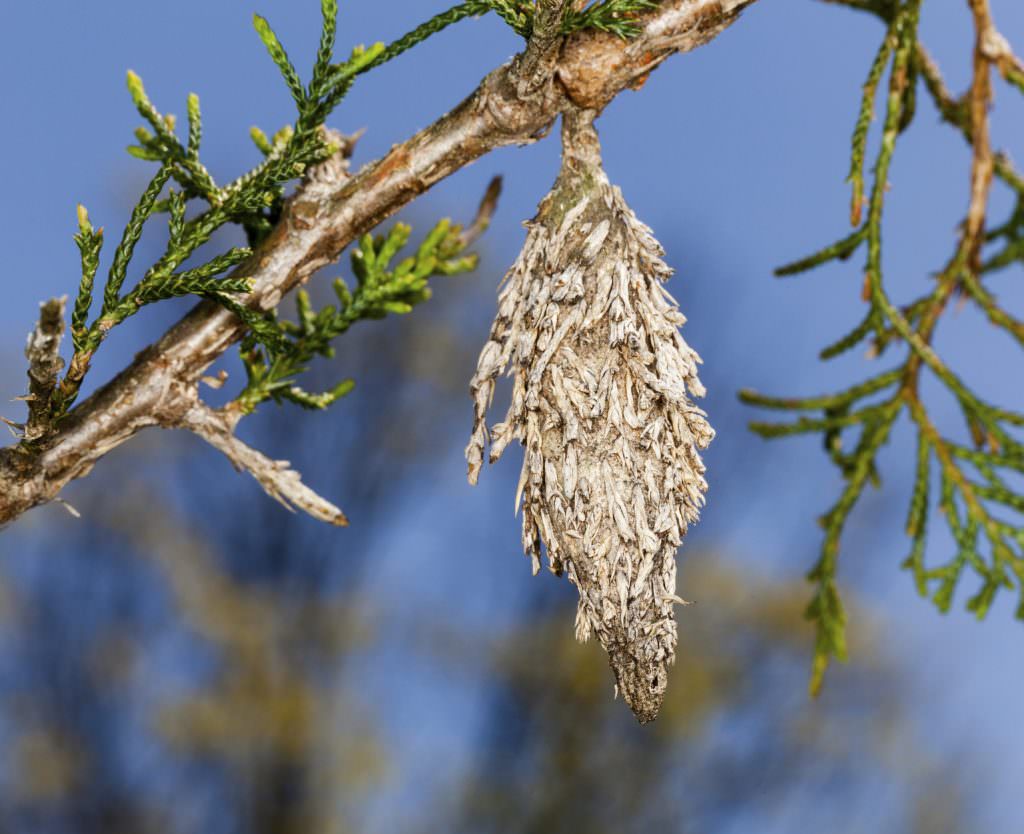 Dealing with Tree Pests in PA

Despite their name, bagworms aren’t actually worms, but caterpillars that spend their summers feeding on trees and shrubs. The most commonly attacked plants include arborvitae and juniper.

Bagworm larvae cause damage to plants by eating needles and leaves. Older larvae can cause considerable damage, especially those that feed on evergreens.

Where did bagworms come from?

Like many tree pests in PA, they were introduced to our shores accidentally, arriving from Europe in the 1940s and first discovered in Albany, NY in 1962. They have since spread to Pennsylvania and other states in the mid-Atlantic region, and as far west as Nevada.

The bagworm gets its name from the spindle-like silken bags the creatures spin to keep safe from birds and other predators. The bags allow them to blend into a tree, which is good for the bagworms, but bad for you, as it allows them to go undetected until the point that they’ve done a lot of damage.

A year in the life of a bagworm

Bagworms typically hatch in early June, spending their winter inside eggs that rested in their mother’s old nests.

Bagworms will reach maturity in late August or early September. By this point, their bags have gotten about two inches long and are impervious to pesticides. They will then affix the bags to tree branches as they begin their transformation into their adult form, black, furry moths with clear wings.

A winged male bagworm adult will then fertilize a wingless female, who lays eggs in the bag. Each female can produce up to 1000 eggs. Those eggs spend the winter in the old bag, hatch in the spring, and the cycle begins again.

How can we control bagworms?

Early detection is key here, for as we noted above, if you don’t notice the infestation in time, the bagworms will be harder to kill with insecticides when they reach a large size.

So start to look for bagworms in the winter or early spring. Their bags, which remain attached to the plants even after the bagworms are gone, are brown and about 1 to 2 ½ inches long. Usually, they’ll be covered with dead needles or leaves. You might even mistake the sacks for pinecones.

It’s possible to simply remove the bags early on – before June when the eggs hatch – and put them in the trash or drop them in a bucket of soapy water to kill them. Pesticides will be most effective if treatment begins early enough in the season when the bagworms are small and mild pesticides can be used. Later in the season when they are larger, harsher pesticides can still be used to try to control them.

The best time to treat for bagworms is during June and early July when they are small and before significant damage has been done to your plants.

Bugged by Bagworms? Willow Tree and Landscape Service Can Help

If you have bagworms – or any other tree pests – bedeviling your property, be sure to contact Willow Tree and Landscape.

We’ve spent more than three decades battling diseases & tree pest infestations while caring for plants in Bucks and Montgomery counties. Our experts can help knock out your infestation and keep your trees healthy.

Get Your Free Estimate!

Greetings from Vancouver, Canada! We took some tim

Transfixed by these Mexican feather grasses we jus

Our friends at @hortulus.farm.pa make it too easy

We care for trees, because we share these trees. H

Here’s to hoping this Monday is as tranquil as t

We’re making things lift off again at the Horsha

From our woods to yours 👏🇺🇸

Spring is always our craziest season, but also mos

Good morning from the Jersey Shore! We’re over h

The most beautiful things in this world are free.

When the Monday is dreary you bring in the reinfor

We’re so good at tree removals that we took down

Is there anything better than a beautiful day and

What more could a girl ask for? Cheddar quiche, Ch

Our landscape team back at it. Calendar coming soo

When the morning starts with @coffeeroomnewtown, y

New season, new wheels! Now if only they made thes

And so it begins! Plant health care season is here

Well look who showed up for work today! We heard h

We have been using Willow Tree & Landscaping Services for many years and will continue to do so. We are more than satisfied with the professional work they do. They are friendly, reliable and trustworthy.